One of the most comprehensive changes taking place across Western nations in the past century has been the increase in female labour force participation, leading to a convergence in labour force participation rates between men and women. However, this gender convergence is much limited in the private sphere: women continue to perform most domestic work. Some scholars have suggested that the gender revolution has stalled due to gendered family processes and institutions that support a gendered division of labour, especially in the home. Proponents of convergence, however, argue that the gender revolution is on-going and spreading because (young) men and women have adopted more gender-equal ideals and have adapted to a less gender-specialized use of time, though the process is slow.

In their article, Ariane Pailhé and Anne Solaz (Institut national d'études démographiques (INED)) and Maria Stanfors (Centre for Economic Demography, Lund University) analyse the trends of level shifts and gender differences in housework and childcare across France, Italy, the Netherlands, Sweden, the United Kingdom and the U.S. from the mid-1980s to the early 2010s. They used data from 12 nationally representative time-use surveys from the countries being analysed.

From the data collected, they found that men’s and women’s time use has tended to converge with respect to unpaid work, but that is primarily due to a decrease in women’s housework time, especially time spent cooking. The relative contribution of women to the total amount of housework has slightly decreased, but they still mostly perform the routine, time-consuming tasks. Looking at men, in some countries they slightly increased the time spent doing housework, but this increase was much less than the decrease in women’s time spent doing housework.

For childcare, the authors observed something different, as changes in men’s childcare time were greater than changes in their time spent on housework. The tendency over the past decades has been to devote more time to childcare, irrespective of gender. However, when looking at the distribution of time spent in childcare between men and women, the data points towards more equality only in the few countries where men increased their time more than women.

Changing practices and norms largely explain changes in housework across industrialized nations, for instance greater opportunity to outsource housework, technological progress in home equipment or domestic products, a decrease in the standards of home cleanliness or the composition of meals over time. Changes in standards have also affected childcare, but in the opposite way. New norms about parenthood have emerged. More time and attention have been directed at the child because parental investment is now considered a necessity for a child’s development.

Regarding the cross-country differences, men’s and women’s housework and childcare time correlate with welfare state regime and macro-level indicators of relevance for gender equality. These results indicate that policies that financially support family services, like subsidized childcare, makes it possible to combine paid work and family responsibilities for all. Women are then able to take on a more independent role as breadwinner and this would contribute to a new equilibrium, whereby men would also start to change their behaviour. 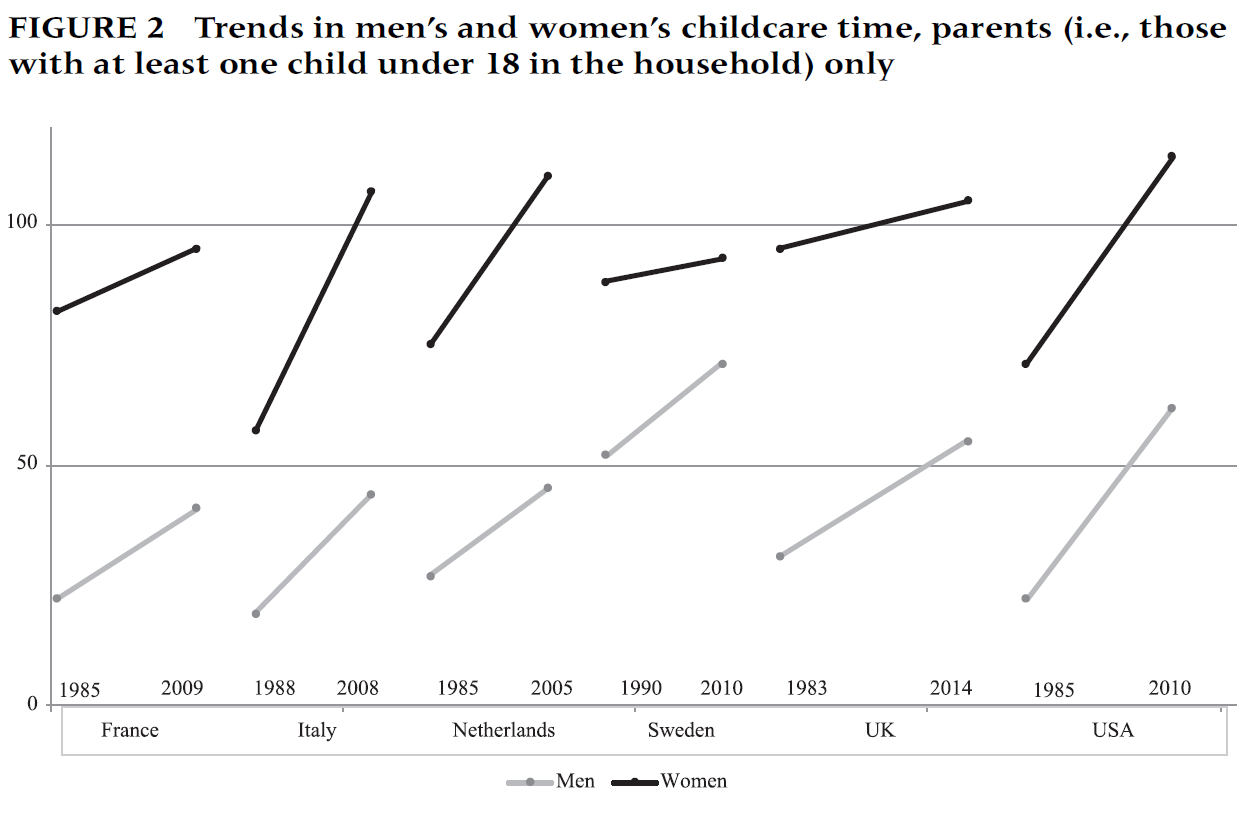