During the Great Recession (2009-2014), Italy experienced both a reduction in fertility and a substantial increase in emigration, the largest such increase relative to its population size since the Big Exodus (1870–1915). According to data from the Administrative Registry of Italians Residing Abroad (AIRE), the net out-migration of Italians from 2008 until 2014 was equal to around 410,000 individuals. If we take the period between 2008 and 2017, this value was 740,000, equivalent to 1.24% of the entire population, and with an outflow in 2014 that was double the size as the one in 2009. Most of those who emigrated during this period were young and highly educated individuals.

In a recent paper published in the prestigious journal Demography, we asked the question: what would have happened to fertility levels in Italy if this massive emigration flow had not happened? Through this exercise, we could also understand what effect the recession on fertility levels would have been in the absence of out-migration. Taking advantage of Europe being a ‘laboratory’ of internal mobility, and focusing on Italy as a test bed, the paper aimed to study who are the individuals who emigrate, in order to uncover how this selection into out-migration might affect fertility in a sending country with very low fertility, like Italy.

Using the richness of AIRE data, which records information about all Italian citizens moving abroad, as well as Italian birth records, we have identified relevant socio-economic characteristics of Italians who emigrated during the years of the Great Recession (2009–2014). We compared them with the individuals who emigrated in the pre-crisis period (2000–2008). From our comparison, we found three main differences between the two groups of emigrants before and after the economic crisis:

In a second step, and by adopting an instrumental variable approach – which helps to exclude the role of confounding determinants of the fertility-migration relationship – we have found that emigration had a positive impact on the total fertility rate (TFR) at the Italian province level. In other words, had emigration never happened, fertility levels in the country would have been even lower.

To highlight the substantial role played by out-migration on Italian fertility during the Great Recession, we have estimated counterfactual (i.e. in a potential situation of non-migration) fertility changes between 2009 and 2014 at the Italian province level. The figure below compares changes in TFR between 2009 and 2014 in two different scenarios: the map on the left side takes into account the changes in TFR attributable to the recession under the observed scenario with migration, while the map on the right side shows counterfactual TFR changes obtained assuming a complete absence of out-migration. By doing so, we could see that all provinces that experienced none or a small positive impact from the crises on fertility in the presence of out-migration (map on the left side) would have actually had a negative change if out-migration had not occurred (map on the right side). 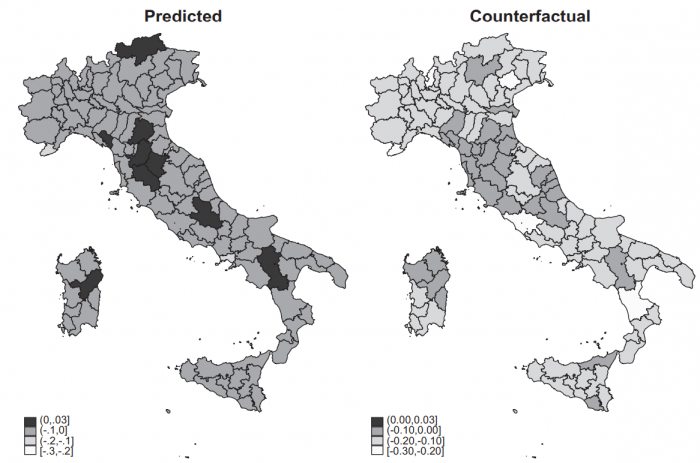 Therefore, our study suggests that individuals who left Italy during the Great Recession tended to be childless or less interested in having children. In the absence of emigration, counterfactual fertility would have actually been lower than it actually is. Such a positive effect of out-migration on fertility in the area of origin can thereby lead to an underestimation of the effect of the recession on fertility.